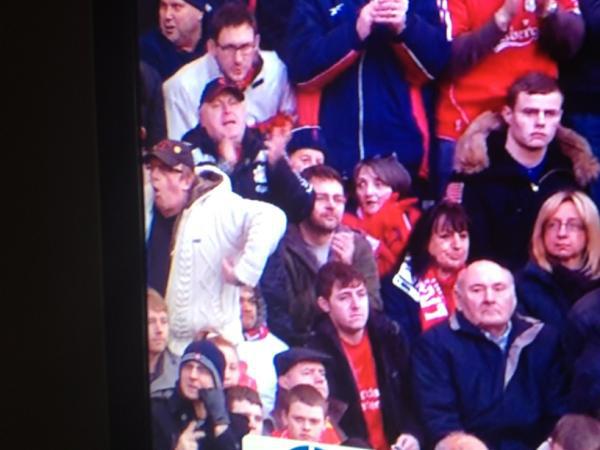 A 59-year-old man has been arrested after a picture was posted on Twitter showing him making racist monkey gestures during the FA Cup Manchester United verses Liverpool game yesterday.

Tensions were high as the two  clubs were meeting for the first time since Liverpool striker Luis Suarez was given an eight-match ban for racially abusing Man U defender Patrick Evra.

Every time Evra had possession of the ball Liverpool fans booed him and Suarez could be seen watching from the stands cheering his team on alongside his wife and child.

Liverpool went on to win the game 2-1.

I saw this last night laughed and then just shook my head –  UNBELIEVABLE. It’s the 1970s / early 1980s all over again.  Football fans are taking it back to the old skool.

A victim of racism is booed throughout the entire match and a 59 years old FOOL who seems to have forgotten that the team he supports has black players is caught making monkey gestures in the crowd.  This really isn’t a good look Liverpool.

UPDATE: The 59-year-old man has now been released on bail.