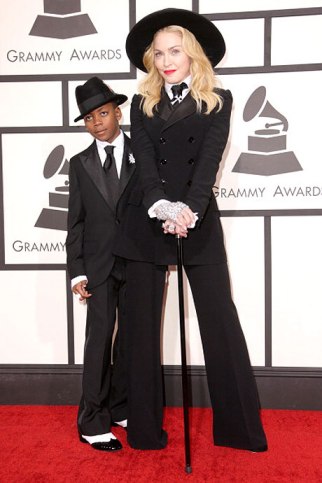 Several weeks ago Madonna caused uproar after she called her Caucasian son Rocco Ritchie a ‘nigga’ on her Instagram page (Click here to read all about it).

The star was then later forced to apologise.

Last night the 55 year old (who is old enough to know better) rocked up to The Grammys red carpet with a gold grill in her mouth and her adopted black son David Banda in tow. Click here to watch them talking to E! host Ryan Seacrest on the red carpet.

Oh dear…. Now isn’t it odd that not long after ‘nigga gate’ Madonna suddenly decides to thrust David Banda even more in to the limelight by showing him off at the Grammys.

This has to be the most suspect and calculating publicity move ever.