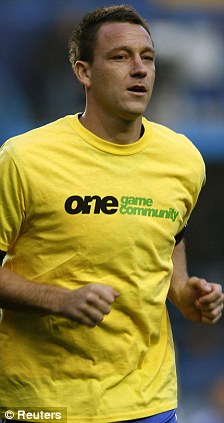 Footballer John Terry has been charged with ‘allegedly’ racially abusing QPR player Anton Ferdinand during a match earlier this year.

The Chelsea star and England captain was seen on television and later all over YouTube shouting abusive words at Ferdinand. He has admitted to calling him a “black c**t”, but denies that the context was racist or intended to cause offence, and says he used the phrase in the context of denying that he had used the offensive term in a previous exchange with Ferdinand.

In response to the news that he has been charged Terry issued this statement,

‘I have never aimed a racist remark at anyone and count people from all races and creeds among my closest friends.

‘I will fight tooth and nail to prove my innocence. I have campaigned against racism and believe there is no place for it in society.’

Hahahaha – yeah okay John! This isn’t the first time you have racially abused black players on the pitch though is it??? You got form son.

“The only thing I know is that I will be fully supportive of John Terry, whatever the outcome”.

“He has my full support, he has the club’s full support. We know exactly his human values and personality. They are never in doubt.”

I bet John Terry is sat at home still recovering from the shock of being charged.

I have said this before and I will say it again, the Internet has grown to become such a POWERFUL tool. It is a BEAST! If it wasn’t for YouTube and the thousands of people voicing their opinions/outrage on countless blogs, Twitter and Facebook this entire incident would have just been swept under the carpet. Five/six years this is what would have happened and Anton Ferdinand would have been taken aside and “advised” by the FA (Football Association) to not take things further and bowed down to the pressure.