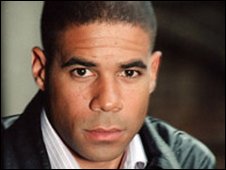 A former BBC television presenter who hit a teenager with a wooden pole in a fight outside a West Midlands bar has been jailed for two years.

Ashley Blake was found guilty of wounding Greg Jones, 17, and intending to pervert the course of justice.

He had denied the attack outside The Place 2B restaurant in Sutton Coldfield, Birmingham.

Jurors heard he swung a patio umbrella pole above his head, hitting the teenager in the face. Continue Reading….

Oh dear……. a career well and truly shot to pieces!