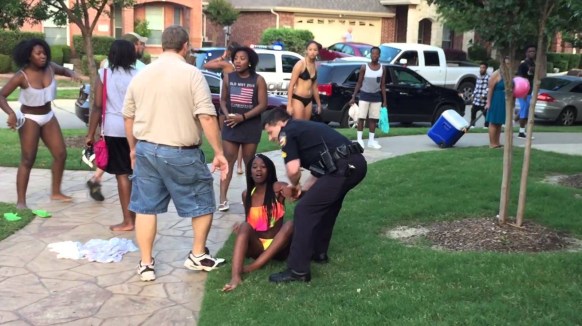 This sickens me to my stomach.

AUSTIN, Texas (Reuters) – A Dallas-area policeman has been placed on administrative leave after a video surfaced in social media that showed him throwing a bathing-suit clad girl to the ground and drawing a gun on another at a pool party disturbance, officials said on Sunday.

“This video has raised concerns that are being investigated,” the police department in McKinney, a city about 30 miles north of Dallas, said on Sunday.

The incident occurred on Friday and raised questions on social media about racial bias in policing since most of the people targeted by the officer (ERIC CASEBOLT), who appears in the video to be white, were black teens in a multi-race crowd.

In the video, the officer, who has not been named, is seen shouting obscenities at the teens and placing a black youth in handcuffs.

Another officer, who also appears to be white, is seen engaging with some of the teens in a cordial manner.

McKinney Police said officers were responding to a disturbance reported at a pool that is part of a residential community and many in the crowd refused to leave.

I still cannot believe what I am seeing. The idiot police officer dropping and rolling like he’s in a Lethal Weapon movie, the way he manhandles a 14 YEAR OLD girl who is in no way a threat, and the other officers who do nothing to stop psycho cop, just makes my blood boil.

The scum bag should be fired but I doubt that will happen.