QUOTE OF THE DAY: RADIO PRESENTER KOJO TALKS ABOUT THE “REBRANDING” OF CHOICE FM 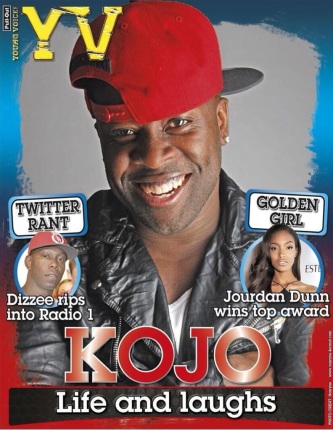 In a new interview with ‘Young Voices’ Capital Xtra breakfast show host/comedian Kojo talks about the demise of Choice FM and the birth of Capital Xtra. He also talks about his recent involvement with the African Caribbean Leukaemia Trust (ACLT).

For me, it was hard being the face of the station and a brand that I had grown up with to all of a sudden get told that all this change is happening and it’s going to happen next week. That was a lot of pressure.

But for me, although losing Choice FM was sad, we left on a high. We had our highest listenership ever and we will forever have the memories.

As a businessman, the business side of me was thinking about my position at the station. Do I want to be a London-based radio presenter for the rest of my life? No. I’m a comedian who has always been national so why shouldn’t I be a part of a national radio station?

For me I am just trying to leave a legacy. I’ve become involved with the African Caribbean Leukaemia Trust (ACLT) and given blood. When I was told the [low] numbers of people that actually donate it was embarrassing. Now it’s about changing that mindset.

We complain about a name change, but we’ve got a chance to change people’s lives and no one wants to step up. These are the things I’m more interested in solving.

“We complain about a name change, but we’ve got a chance to change people’s lives and no one wants to step up. These are the things I’m more interested in solving.”

I detect an air of self-righteousness here.

Kojo gives the impression that the black community is not supporting the ACLT. Many of us in the community (myself included) have supported the ACLT and their campaigns for over a decade and have stepped up and donated blood. This has been happening for a long time, long before Kojo decided to jump on board and became a spokesperson a mere few months ago.

Also when it was announced in January 2011 that the ACLT was facing closure (click here to read) the community united and helped to raise over 80k, which is why the organisation is thankfully still with us today.

Yes, it is true that there is still a need for more donations but the numbers have improved steadily throughout the years (and still continues to do so) thanks to numerous campaigns, fundraisers, blood drives and the community’s support.

“We complain about a name change”

In regards to the Choice FM “rebranding” the backlash was about more than just a ‘name change’. In the world of radio situations change all the time – it is a business after all, but the way Global Radio (Choice FM/Capital Xtra owners) handled the entire situation and treated Choice FM’s longest serving DJs was totally unacceptable. Some were told that their services were no longer needed just days before the rebrand was due to take effect, while others were told over the phone or minutes before they were due to go on air.

But it is easy for a cull survivor to forget particular aspects of the change over when  you are fortunate enough to still have a job and you are apparently still “the face of the station”.