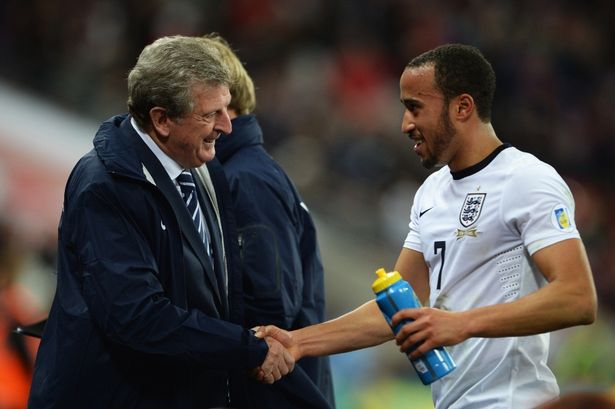 Andros Townsend has defended Roy Hodgson after the England boss was caught up in a row over a ‘monkey’ joke he told his players in the dressing room during Tuesday night’s win over Poland.

Hodgson recounted an old NASA space monkey joke at half-time – words that are thought to have caused offence to one England player, who believed it carried racial connotations.

But the Tottenham star says that “no offence was meant and none was taken” over Hodgson’s words, which were used to encourage Chris Smalling to get more of the ball to England’s winger in the second-half.

“I don’t know what all this fuss is about. No offence was meant and none was taken! It’s not even news worthy!” he tweeted.

Wayne Rooney also leapt to the defence of the England manager, tweeting: “Seen the story on roy this morning. He done nothing wrong. This is ridiculous.”

The England boss is believed to have recounted the joke in full, which reads:

“NASA decided they’d finally send a man up in a capsule after sending only monkeys in the earlier missions,” the joke goes.

“They fire the man and the monkey into space.

“The astronaut takes umbrage and radioes NASA, ‘When do I get to do something?’

Anyway the England manager has since apologised and said in a statement,

“There was absolutely no intention on my part to say anything inappropriate. I made this clear straight away to Andros in the dressing room.

“I also spoke to Andros again on Wednesday. He has assured me and The FA he did not take any offence, and understood the point I was making in the manner I intended.

But anti racism organisation ‘Kick It Out’ are not entirely convinced and has called for an investigation in to Hodgson’s ‘joke’.

In a statement the group said,

“Kick It Out, football’s equality and inclusion campaign, recognises and shares the concerns of the parties who felt mindful to bring the comments into the public domain.

“The matter has been raised by the Chair, Lord Herman Ouseley, directly with The Football Association (FA), who acknowledges the apology made by Roy Hodgson, and now seeks an investigation to ascertain the full facts and ensure a similar situation does not arise again.”

I am curious, I wonder who reported Hodgson to the FA (Football Association) because in general when it comes to speaking out against racism etc, black/ mixed race footballers are a lost a cause, who behave like their tongue’s have been cut out and I am past caring about their plight.

I don’t think a black/mixed race player leaked this incident because even if Hodgson’s did say something blatantly racist in the dressing room none of those cowards would have the balls to report him.  No, I suspect someone within the back room staff (most likely Caucasian) is responsible for this leak.

All I can do right now is just laugh at him.

Your thoughts please. Is Hodgson guilty of racism or just guilty of telling a bad joke?