POINTLESS EVENT OF THE YEAR: GQ MEN OF THE YEAR AWARDS 2012 (WINNERS LIST) 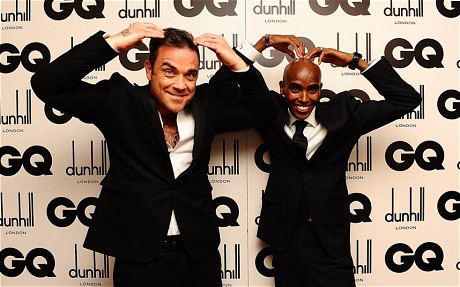 GQ Magazine really does have money to piss away each year on lavish and pointless award ceremonies.

Tanqueray Most Stylish: Dermot  O’Leary – Oh please! Style comes down to more than being an acceptable clothes horse for skinny fit designer suits.

Comedian: Sacha Baron Cohen: Apart from releasing the film The Dictator what else has Sacha done this year?

Icon: Robbie Williams – Robbie briefly returned to the group Take That with his tail between his legs and is now hoping to restart his faded solo career. You see old Robbie here is desperate for some decent media coverage before he releases a new album and wants to remind us all that ‘yes I am still alive’. So GQ has done him this favour and given him a dubious “Icon” award.

Inspiration- Sir Salman Rushdie – Millions of muslims around the world would probably disagree.