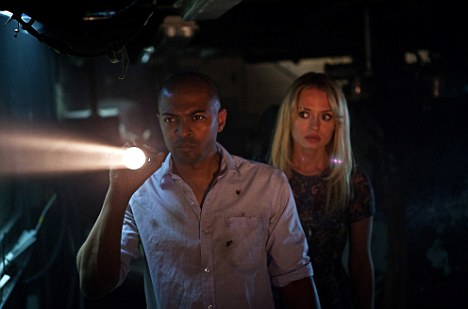 Whenever a project that involves actor and writer Noel Clarke is about to be released the level of Twitter hype surrounding it goes in to overdrive.  So naturally I was curious and decided to see if his latest flick Storage 24 lived up to all the hype and if it really is “AMAZING”.

Storage 24 co-written and co-produced by Clarke is set in a large 24-hour storage unit. Clarke plays Charlie a man who is on the brink emotionally after being unceremoniously dumped by his long-time girlfriend Shelley (Antonia Campbell-Hughes). Charlie desperately wants to know why she has decided to end the relationship and looks to his so-called best friend Mark (Colin O’Donoghue) for comfort, advice and answers.

While Charlie moans to a suspiciously irritable Mark about the break-up and goes through a range of different emotions, the love of his life Shelley is busy in the storage unit dividing up their possessions with her friend Nikki (Laura Haddock) and a male friend.

The action finally kicks off when Charlie and Mark arrive at the Storage unit hours after a mighty bang shakes London to its core. News stations report that a military cargo plane has crashed but know nothing of the plane’s sinister passenger, a creature who now resides in the storage unit and is busy committing all manner of atrocities.  As you can imagine this is bad news for the Storage unit’s occupants who are now all trapped inside thanks to the crash sending the security system in to lock-down and causing intermittent power outages.

This then sets the scene for blood, gore and humans running for their lives from the large creature prowling the corridors. We also see weak and annoying Charlie transform in to a bit of a hero.

For those of you who haven’t watched Storage 24 think horror classics Alien, Predator and the recent hit British flick Attack The Block.

I liken it to the film Alien because here you have a group of people trapped in a dark and frightening environment, a dangerous creature is on the loose and everyone is fighting to survive.  If you have seen Alien you will see the similarities straight away.

Attack The Block because in my opinion they tried to recreate that same look and feel but it lacks some of Attack’s humour, quirkiness and originality.

And Predator because the creature they created reminds me of the creature featured in the classic (minus the dreadlocks). It looks like a cross between Predator and a monster that you might see on TV’s Doctor Who.

The film does start off slow but gathers pace when the hunted are trapped and come face to face with the creature that is desperate to disembowel them all.  However after that events seem to rush to a somewhat familiar conclusion (visually) which left me thinking that the story could have been developed and explored more before racing to reach its climax.

In closing I will say that Storage is far from original in its approach to the horror film genre but the actors put in reasonably good performances and there is the odd scene that will succeed in making you flinch.