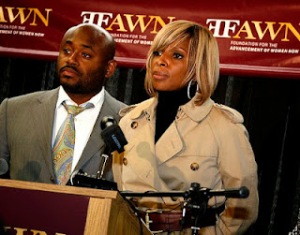 TMZ reports that singer Mary J. Blige and entertainment mogul Steve Stoute’s charitable organisation Foundation for the Advancement of Women Now is being sued by TD Bank over a $250.000 loan.

They took out the loan back in June 2011 and according to the suit the foundation agreed to pay back the money by December 2011, but so far they have only managed to pay back $368.33

Blige and Stoute are also being sued by musicians who claim they still haven’t been paid for performing at a fundraising gala which took place in 2011.

“The Mary J. Blige and Steve Stoute Foundation For The Advancement Of Women Now, Inc. (FFAWN) is presently transitioning its management and headquarters.”

Steve Stoute is a VERY wealthy man and Mary has done alright for herself financially so why did they need to borrow money (a relatively small sum for Steve) from the bank in the first place?

This is another charitable organisation set up by celebrities who just don’t have a bloody clue when it comes to running these types of organisations and end up leaving it in the hands of dubious individuals.

I guarantee that the Foundation For The Advancement Of Women Now, Inc will soon be no more.