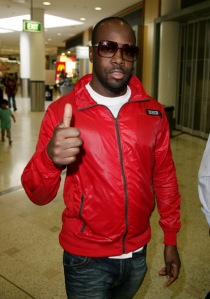 It seems that musician and wannabe politician Wyclef Jean is having a hard time accepting his rejection as a presidential candidate for Haiti’s November election.

Wyclef, however, isn’t taking the news lying down and according to Punchbowl Blog is blaming outgoing President Rene Preval of engineering his rejection.

The rapper has also written and recorded a track telling the world about the ‘unfairness’ of it all.

Get over it Wyclef!  Move on!

Think of another way to support/help your homeland in it’s hour of need. Or is being called PRESIDENT Wyclef Jean, the added perks that come with the title and escaping accusations of fraud with regards to your charity more important to you?

I’ve watched superstar Clef prance around Haiti in an expensive suit with an entourage in tow, watched him being crowd surfed to the stage before delivering his first campaign speech and heard him liken himself to Obama. I can’t help but give him the side eye.

To quote various US bloggers – “Something in the milk ain’t clean”.