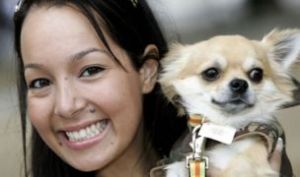 Yes according to that tabloid rag The Sun model, TV presenter and I quote “TV rap girl” Donatella Panayiotou, 26, was the main target when gunmen walked in to The Grime Daily 1st anniversary party this past weekend and sprayed the place with bullets.

A MODEL and TV presenter narrowly cheated death when a machine-gun nut shot three revellers at a rap gig she organised.

“It” girl Donatella Panayiotou, 26, was near the DJ booth when the maniac opened fire.

Donatella – thought to be the target – was next to a 23-year-old man who was blasted four times in the chest and buttocks.

A woman, 21, and another man, 24, were also hit. All three victims were last night serious but stable in hospital.

Specialist Radio 1 DJs and UK grime music acts were among 600 clubbers who ran for cover at a warehouse owned by Donatella’s dad in Colindale, North West London, at about 4am on Sunday.

A witness said: “The gunman was aiming for Donatella. I’m amazed she wasn’t killed.

“He just pulled out his gun and started firing at the DJ booth. People were almost trampling on each other to get out. Women were screaming.” Donatella was found hiding in a cupboard.

Donatella, whose dad Angelo is a millionaire club boss, was in ITV documentary Young, Posh And Loaded. She has appeared on MTV, GMTV and in ITV’s Loose Women.

Pals believe the shooting was revenge for an act of “disrespect”.

Donatella runs an influential online guide to the urban music scene, and friends claim an act she refused to feature was behind the shooting. Continue Reading….

[Thanks FR and Shach]

I’m having a hard time believing that those scum bags were targeting Donatella.  It  sounds like her publicist ( and Donatella) contacted The Sun / The Metro and to gain some publicity cooked up this story around the incident so that the spotlight shines on Donatella.

Forget about the victims just put some shine on the “TV rap girl”.

A witness said: “The gunman was aiming for Donatella. I’m amazed she wasn’t killed.

I wish the VICTIMS well and both a speedy recovery.