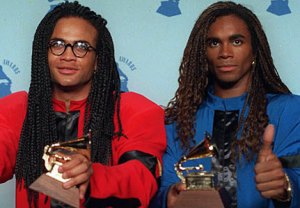 Fabrice Morvan, one half of the duo who sparked outrage in 1990 when it emerged that they had used session vocalists to sing their tracks, insisted that modern acts are similarly fraudulent with their music.

The star pointed to lip-synching during live concerts and studio technology such as vocal auto-tuners as examples to back up his point. He told USA Today: “It’s not about being authentic anymore, it’s about [being] entertaining.”

Milli Vanilli were forced to return the Grammy they won for single ‘Girl You Know It’s True’ after their plagiarism scandal broke. Continue Reading…

Milli Vanilli…. they bring back memories……..

Milli Vanilli were the originators when it came to ‘faking it’ in the Pop world, but after the proverbial hit the fan back in 1990, Rob and Fab were then brutally thrown under a bus by the man who initially came up with the idea and encouraged the deceit.

Read all about Frank Farian below…

Pilatus and Morvan were noticed by music producer Frank Farian, who signed them to be part of a musical act. Shortly after a trip to Turkey, where the duo was reputed to have gotten the band name from a local advertising slogan, Milli Vanilli was born, with Pilatus and Morvan serving as the public faces for the vocal talents of Charles Shaw and Brad Howell, who Farian thought were talented musicians but lacked a marketable image.

Despite the enormous success, the duo were a frequent target of rumours and allegations of on-stage lip-synching and not having sung on the album. Charles Shaw, one of the actual vocalists of Milli Vanilli, told a reporter about the truth of the group’s secret, but later retracted his statement after Farian paid him $150,000.

When Pilatus and Morvan pressured Farian to let them sing on the next album, Farian revealed the truth to reporters on November 15, 1990 that Pilatus and Morvan did not actually sing on the records and their voices were dubbed. Milli Vanilli’s Grammy award was withdrawn four days later, and Arista Records dropped the act from its roster and deleted their album and songs from their catalog, making Girl You Know It’s True the largest-selling album to ever be taken out of print. A court ruling in the United States allowed anyone who had bought the album to get a refund. Source

The funny thing is if the duo went down the same route in 2010 the industry wouldn’t bat an eyelid.

Rob Pilatus died of an accidental overdose of prescription drugs in Frankfurt on the 2nd April 1998.