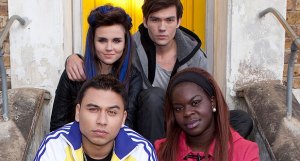 Eastenders online spin off Eastenders: E20 is currently being screened online throughout January, and the only cast member who hasn’t made the transition from the online spinoff to the main BBC 1 soap is surprise surprise, actress  Bunmi Mojekwu.

In an interview with Digital Spy Bunmi told the website that she is not upset by the decision, and went on to say,

“If I was meant to go into the main show, then I would have done. Obviously I’d have loved to but for someone like my character, it’ll be the support of the viewers that decide her fate. I don’t feel upset or anything, I just thought that it’s the way these things go.”

In the beginning, I don’t think they saw the strength of Mercy and then as I got into it, they really started to see that she has an impact and that she could go on and have a story. The door’s right open!”

I watched the episodes that featured three actors from the E20 cast on Eastenders last week, and wondered what had happened to the black chick.

This really shouldn’t come as a surprise to anyone. Eastenders has already filled its quota when it comes to featuring black characters. We already have Patrick, Denise, Chelsea, Libby, Lucas and market trader Winston. That’s enough.

However Bunmi insists that the door has been left open for her character.

I wouldn’t hold my breath luv! That door has been bolted shut and sealed tight like a virgin.

I wish Bunmi the best of luck with finding future acting roles on British television.