An Interesting Couple Of Days In Showbiz… 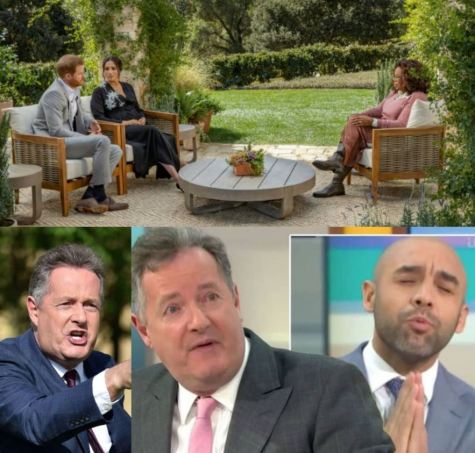 WELL! It has been an eventful couple of days in the world of showbiz. The highly anticipated Megan and Harry interview with Oprah aired in the US on Sunday night and here in the UK on Monday. Good Morning Britain host, Piers Morgan RAGED about the interview, from 6.30am to 9am on Monday morning. The following day, Piers took it a step further when he walked off the set, during a heated debate with Alex Beresford. Alex criticised his colleague for continuing to “trash” Meghan. Hours later, Piers quit the show. Oh, the drama!

Anyway, the words that kept on popping up in my head during the Meghan and Harry interview were; Ill-prepared and naïve.

I cannot believe that Meghan did no research before marrying into the monarchy aka the belly of the beast. She didn’t understand what that meant at all and just viewed them as being celebrities. Did Meghan think she was marrying into the Kardashian/Jenner clan?

A lot of what Meghan revealed, mirrored what Princess Diana had already told us about the Royals and the people who run the show (“the firm”). She probably should have watched Diana’s interview before agreeing to marry Harry. Or at least had a conversation with Prince Andrew’s former wife, Sarah Ferguson. No one ever talks about her experience. The Royal family follow a set of rules dating back centuries. They did not change or show much compassion towards Diana or Sarah, so what made Meghan think they would change and be less rigid towards her?

I always thought that women who married into the Royal family received a form of training and were schooled on the rules and protocol. I remember when Prince William and Kate Middleton gave their first interview after announcing their engagement. William said he ensured that Kate understood what she was getting into. But I did not get the impression that Harry bothered to have an in-depth conversation with Meghan beforehand about life as a Royal.

Speaking of Kate Middleton and Prince William, Kate has the look of a woman that wishes she could leave. William looks like he has had enough and misses being a search and rescue helicopter pilot/medic, for the East Anglian Air Ambulance. When will the mainstream media have a conversation about this???

For someone who was born into the monarchy, Harry came across as being very naive. However, he soon got his wake-up call. ‘You leave, you are on your own! We will remove your security and everything else that comes with being a Royal’. It was then when he realised this isn’t a family, this is a business!

It sounds like life was difficult, but Meghan and Harry live in sunny California now, they are wealthy, they have Archie, a second child on the way, Tyler Perry organising their security and chickens to feed. They will be OK.

Now back to Prince Andrew!