Should Jamaica Accept £25 Million From Britain For New Prison? (Video) 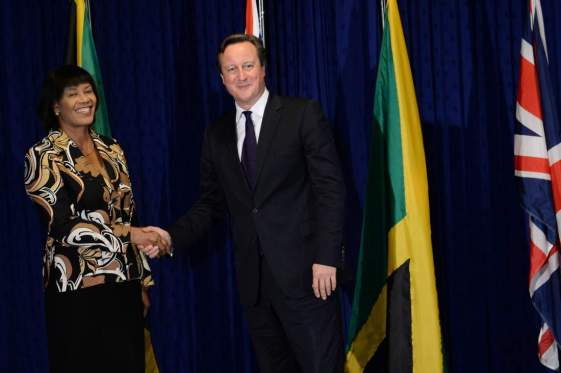 Cameron visit to Caribbean – Day One. Prime Minister David Cameron is greeted by Jamaican Prime Minister Portia Simpson-Miller at her office, Jamaica House, in Kingston, on the first of a two day visit to the Caribbean. Picture date: Tuesday September 29, 2015.

Jamaicans have reacted with rejection to the announcement by British Prime Minister David Cameron to provide £25 million to help build a new prison here to house Jamaicans jailed in the UK as well as local inmates.

I could strangle Portia Simpson-Miller.

The Jamaican government should be focusing on investing in education, healthcare, improving the infrastructure and providing more jobs and opportunities for its citizens.

It hasn’t gone unnoticed that Cameron has used this disgraceful news to deflect from reparation talks . Instead the descendant of slave owners himself urges Caribbean countries to “move on”, but in the same breath tells the world we should never forget THIS.

The prime minister acknowledged that “these wounds run very deep” during his visit to Jamaica, where he faced calls to apologise from campaigners.

He said Britain’s role in wiping slavery “off the face of our planet” should be remembered.

Is this what you want us to move on from prime minister?