BBC ONE TO BROADCAST THE STEPHEN LAWRENCE ‘UNITY’ CONCERT 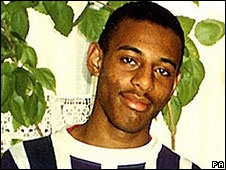 Via The BBC Media Centre

The BBC will broadcast highlights from The Stephen Lawrence Unity Concert on Tuesday 1 October at 10.35-11.35pm on BBC One.

The concert, in memory of Stephen Lawrence, comes 20 years after the 18 year old was stabbed to death by racists in South East London, and unites some of music’s biggest names for a special show. BBC One will broadcast a 60-minute show from the performance held on Sunday 29 September, with the concert also being repeated on BBC Three on Saturday 5 October and additional performances will be available on the Red Button.

I look forward to seeing the acts chosen to feature during  those 60 minutes of highlights…..