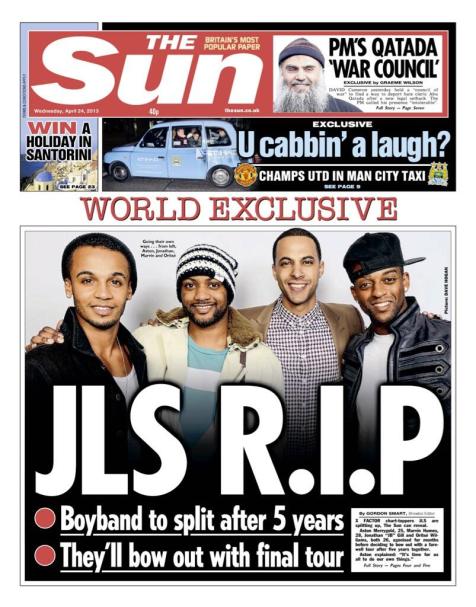 Soul destroying news this morning folks…. yes it is true…  JLS has announced through tabloid rag The Sun that after 5 years together they have decided to go their separate way.

“It’s an emotional time. There’s no getting away from that.”

This morning the band also tweeted:

To the BEST fans in the world,it is true.THANK u 4 ur undying support and love.U will NEVER be forgotten. #amazingtimes #amazingmemories 💛Jx

There will be a Greatest Hits album and a farewell tour.

In my opinion the writing was on the wall after the release of their last album titled Evolution. JLS worked with several American Hip Hop and R&B producers on the album but it didn’t do as well as expected.  Then after that they all started to focus on their own individual ventures. Marvin Humes now hosts a show on Capital FM, Ashton Merrygold is now a judge on Sky 1 show Got To Dance and the others are working on their own music related projects.

I also think that the One Direction takeover also drove the final nail in the band’s coffin.

But it should be noted that JLS were runners-up on TV talent show X-Factor back in 2008 and since then have done phenomenally well, so I understand why many are shocked and saddened by this news.

I do however suspect that within 5 years they will be back promoting a “reunion” tour or appearing on the hit ITV 2 show The Big Reunion.