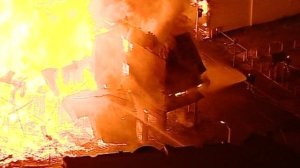 A third night of mindless rioting and looting in London, which also spread to the cities of Birmingham and Liverpool. This has now finally convinced Prime Minister David Cameron and Mayor of London Boris Johnson to cut short their holidays and both will return today.

I am just angry and disgusted right now. The police don’t seem to be doing anything (which is strange) but I was happy to hear that citizens started defending themselves last night. A group of Asian young men chased the thugs out of Brick Lane (East London) and Turkish business owners in North London attacked them with metal poles. I also heard that thugs went in to a restaurant in Notting Hill and attempted to attack and rob customers, but the brutes soon made a run for it after staff walked out of the kitchen armed with knives.

Anywhere else in the world tear gas and water cannons would be reigning down on those thieving scum bags heads by now.

If you wish to help with the clean up after the London riots click HERE for more information.