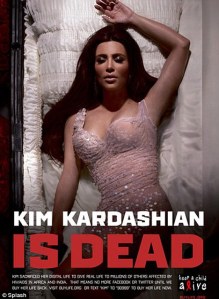 It looks like somebody took pity on Alicia Keys and the celebrities who took part in the farcical/struggling Digital Death Campaign  and  has donated $500,000 to the cause.

The much-publicized Digital Death campaign of Keep a Child Alive organization, spearheaded by Alicia Keys, has finally made $1 million in donations after a very slow start, thanks to a billionaire.

The campaign, which sees celebrities “digitally dead” from their social network sites in the hopes of raising a million dollars for the charity, was met with lukewarm response from the fans.The idea was for the stars – such as Keys, Lady Gaga, Elijah Wood, Kim Kardashian, Justin Timberlake, and Serena Williams – to stop updating their Twitter and Facebook pages, therefore “dying” from their digital life, until they were able to collect $1 million from their followers.

But it seems the stars have overestimated their power over their millions of followers. The campaign was met with criticisms and was joked about on the blogosphere. Donations barely reached $200,000 by last week. So it seemed that the over-tweeting stars wouldn’t be able to come back from the dead for a while.

Not anymore, though. Pharmaceutical tycoon and billionaire Stewart Rahr took pity in the dead celebs and allowed them to update their Twitter and Facebook to their hearts content once more by donating $500,000. Continue Reading….

The biggest joke was that the likes of Usher, Kim Kardashian, even Alicia and hubby Swizz Beatz were back on Twitter within days of releasing their cringeworthy ” last tweets and testaments” videos.

Anyway a PHARMACEUTICAL tycoon donated a huge amount of money and ended up saving this campaign… Hmmmmm.. interesting…..

I just hope the money ends up going to the people who need it the most and it makes a difference in their lives.