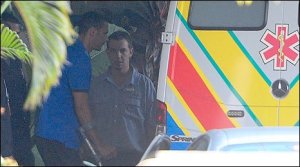 England captain Rio Ferdinand has been ruled out of the World Cup after suffering a knee injury in training.

The 31-year-old centre-back had a scan after hurting his left knee following a challenge with Emile Heskey during Friday’s first training session.

He emerged from hospital on crutches and Tottenham’s Michael Dawson, who had been put on standby, is expected to fly to South Africa in the next 12 hours. Continue Reading…..

Earlier on today my colleague said that a member from the England squad would suffer an injury during a training session, and she was spot on!

What a pathetic start.

I want to believe in them, that they can win, but I can’t.

Even their manager Capello seems disappointed with them. Did anyone catch the look on his face after the “friendly” match against Japan?

All I see when I look at the England squad (apart from Wayne Rooney) is a bunch of over paid, pampered individuals, who have no energy, lack passion and don’t actually look as if they even care about the tournament.

I therefore predict a series of lacklustre performances during the group matches (up against less experienced teams). England will still manage to scrape through, but will then go on to lose narrowly to serious opposition in the semi/quarter finals (a penalty shoot out will be the decider).

Everyone will then go on to pretend that England came close to winning, even though their overall performance was beyond dire.