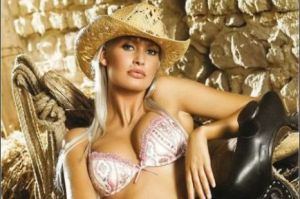 The 27-year-old Hungarian star, real name Brigitta Kocsis, was remanded in custody after Italian judges saw videos of goggle-eyed teenagers ‘touching her intimately’ during the performance in Perugia – which the boys had uploaded to Facebook.

‘I think the judge is just biased against sexy women,’ fumed her lawyer.

‘Brigitta was just doing her job – dancing. But she has to stay behind bars. She has no criminal record, whereas the owner of the disco, who employed her and let the young boys in was set free.’

I’m sorry but her lawyer’s comment made me laugh out loud – ‘I think the judge is just biased against sexy women’.  😀

As for the owner of the venue, I can’t believe he’s free to walk without facing punishment. I bet this isn’t the first time he’s allowed minors to enter his establishment.