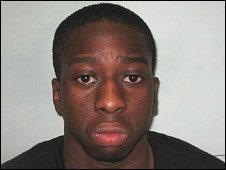 A 19-year-old man who was found guilty of murdering a Matalan shop manager has been sentenced to life with a minimum 20-year term.

Mr Simpson was stabbed in the neck with a 10-inch knife during the hold-up at the store in Hackney, east London.

Essel, of Manor Park, east London, was found guilty of the murder by an Old Bailey jury in February. He had denied the charge.

The knifeman, who told the court he was “panicking” as he stabbed Mr Simpson three times, was also given 11 years’ detention for conspiracy to rob. Continue Reading….

Murderer Kobina Essel – Look at the state of that murderous scum bag. I’m just sitting here staring at the bull frog.  I just want to rip his lips off.

Now that the loser’s locked up the authorities should do us all a favour and throw away the key.