The show was a complete shambles but host Peter Kay and his dead pan humour made me laugh out loud on several occasions.

The majority of the artists who appeared in front of the camera appeared to be “under the influence”.

Actor Idris Elba looked a mess when he galloped on stage, wearing dark shades which he then quickly removed, to present an award. He looked drunk and high.

Lilly Allen was completely off her face (well nothing new there) and I don’t even want to talk about Liam Gallagher (what a fool!).

Anyway Mad News would like to congratulate Dizzie Rascal for winning the Best British Male award. However I still don’t understand why the camera cut away from Dizzee during his acceptance speech and zoomed in on Jay-Z’s mug. What was that all about????

Highlights and Lowlights of the evening….

The “highly anticipated” performance from the “nation’s sweetheart”, “Saint” Cheryl Cole was a colossal joke. She can’t sing and mimed (the only artist to do so) –  BADLY!!!

The convicted batterer of toilet attendants/”alleged” racist is currently going through a hard time. Yes….unfortunately footballer husband Ashley Cole has been accused of cheating on her with another woman AGAIN… amongst other things. But last night talentless Cheryl put on a brave face and performed “through the pain”.

My heart bleeds for you Cheryl…. it really does….

JLS’ performance was weak. I expected a lot more.

Lady Gaga is a strong live vocalist but she should of sang one of her well known tracks.

Dizzie Rascal’s collaboration with Florence (from Florence and the Machine). 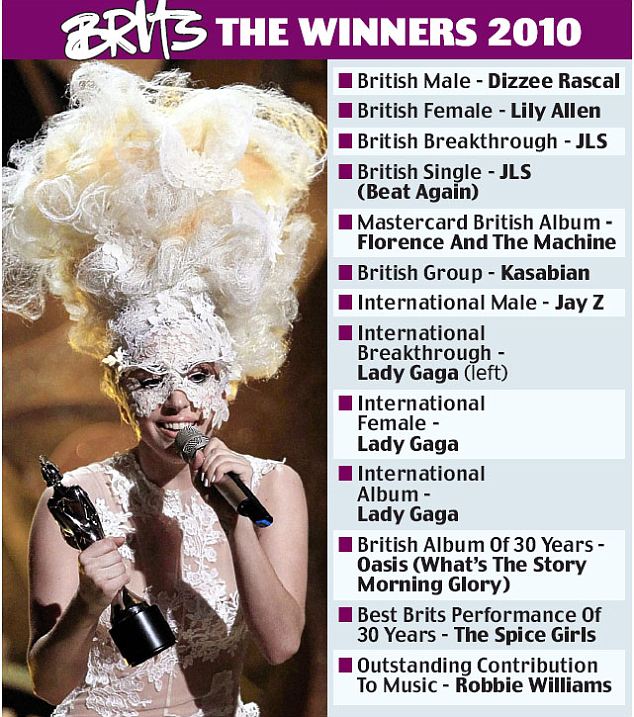 Did you watch the Brit Awards last night? If so then what did you think?