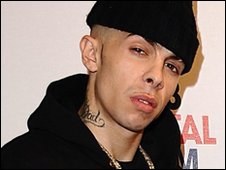 Charity Beatbullying have confirmed to the BBC that they will no longer be working with N-Dubz star Dappy after he sent a death threat text message to a Radio 1 listener.

Dappy became involved with the government backed campaign, Beatbullying, in 2009 and even made a speech protesting against cyber bullying.

N-Dubz themselves even wrote the song called ‘R U Cyber Safe?’ for the cause.

Yet despite this, he still took the time to send a death threat to a 22-year-old Chloe Moody after she called him “vile”, “repulsive” “a little boy with a hat” on Chris Moyles’ breakfast show. Continue Reading….

Oh dear…. being called “vile” and “repulsive” has got to hurt.

However Dappy really needs to develop a thicker skin and needs to heed the advice of Public Enemy- “DON’T BELIEVE THE HYPE!”

As for now being dropped from the anti bullying charity… you couldn’t make this stuff up even if you tried!