‘COUPLES RETREAT’ FILM POSTER: UNIVERSAL PICTURES YOU HAVE SOME EXPLAINING TO DO!

It was brought to my attention last night that the international promotional poster for the newly released film Couples Retreat starring African-American actors Faizon Love and Kali Hawk is terribly misleading.

A friend told me that Faizon Love and Kali Hawk both have relatively big roles in this film. But you wouldn’t know that from looking at the promotional poster created for the international market.

Check out the differences between the US market and the International market posters below.

The poster created for the US market.  OK so Faizon and Kali have been deliberately placed right at the back (you can just about see them) but at least their names have been included in the list of credits above. 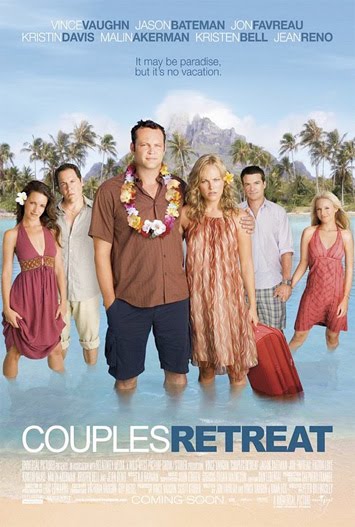 Poster created for the International market (currently seen in Britain and the rest of Europe). Faizon and Kali’s images and names have been removed from the poster!

I look forward to hearing from you Universal!