UK NEWS: JAVINE TALKS TO THE NEWS OF THE WORLD ‘ HARVEY HAD SEVEN LOVERS’ 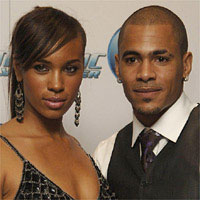 Javine and Harvey during "happier" times.

Javine must be really desperate for the attention, sympathy and dough.

It was always going to end in tears dear! Move on! Focus on your daughter and the future.

Via The News Of The World

New judge Alesha will be devastated by our revelations – until now the former Mis-Teeq singer has blamed sexy Eurovision star Javine Hylton for stealing her man and wrecking the relationship.

But it’s Javine herself who is now telling all on So Solid Crew rapper Harvey after dumping him over his bedhopping and violence.

Now in hiding with their one-year-old daughter, Javine told us: “Harvey is a serial womaniser with a big problem. He cheated on Alesha with A LOT of women. I did her a big favour by taking him off her hands – and after three horrible years, boy do I regret it.” Continue Reading….

Javine’s in hiding and Harvey’s various lovers were afraid to blab about his cheating ways.

Wow I had no idea Harvey was such a ‘gangster’…..