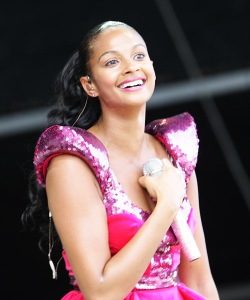 New Strictly Come Dancing judge Alesha Dixon is to front a “personal” documentary examining the emotional and practical implications of children who don’t know their fathers.

Dixon, who has recently hit the headlines after being criticised for her performances on Strictly as the replacement for Arlene Phillips, will turn documentary maker for the BBC3 film, which will be made by production company Flame TV.

The programme, to be called Who’s the Daddy?, will feature Dixon – whose parents split up when she was four years old – talking to children and experts and exploring the repercussions of growing up without a father.

“The idea came purely from Alesha,” said producer and director Christina Nutter. “It is something that she feels strongly about. Her dad left her mum when she was four years old and she has grown up in a single-parent family, although she still sees her father. She feels strongly for children who don’t know who their dads are.” Continue Reading….

The title alone puts me off the idea of watching this documentary.

I wonder if Maury Povich will be invited a long to share his views?

Anyway I first posted the news about Alesha’s up and coming TV project several months ago and I wrote  this….

Dixon will be fronting this documentary so it will basically shine the spotlight on young women from within the black community who are possibly unemployed, struggling to raise at least three children by the themselves somewhere deep in South London, because their ‘road man’ baby fathers just got up one day, left, and never returned.

Then the spotlight will focus on the black man who will end up looking worthless and completely irresponsible before the documentary reaches it’s climax.

Dixon will then visit psychologists, community workers, social workers, and a host of UK ‘urban’ personalities, to discuss finding a solution to this problem.

Then she will conclude with some words of wisdom Rev Run style.

My thoughts still remain the same!

Tagged as: Alesha Dixon, BBC 3, Children, Documentary, Who's The Daddy