Murderers: The defendents belonged to a gang in South London. Look at the state of them….

A teenage girl has been convicted of murdering a boy of 16 who was lured to his death in a “honey trap” plot.

Shakilus Townsend was stabbed to death by members of a gang in Thornton Heath, south London, last July after being lured to flats by Samantha Joseph, 16.

Joseph admitted persuading Shakilus to go to the flats but said she only thought he would be beaten up.

The girl’s boyfriend Danny McLean, 18, was among six other teenagers also convicted of murder at the Old Bailey.

Brothers Tyrell Ellis, 19, and Don-Carlos Ellis, 18, from Thornton Heath, were convicted of murder, together with Andrew Johnson-Haynes, 19, from Croydon, south London. 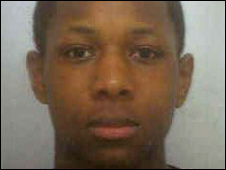 That poor boy was lured to his death by Joseph because she wanted to get back with her ex- boyfriend – a waste man gang member who she claimed she was “still in love with’.

I’m just sitting here shaking my head in disbelief and with disgust.

I just hope the judge throws the book at that conniving waste of space (Joseph) and those murderous thugs!