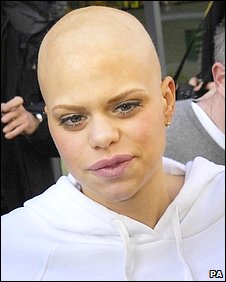 Jackiey Budden has claimed that she has been “visited” by late daughter Jade Goody twice since she passed away in March.

The 51-year-old, who helped nurse Goody in her final weeks, said that the reality star is still communicating with her after her death.

“I was laying on a sunbed outside my apartment and talking out loud, saying ‘Jade, you told me to call you and I am but you don’t answer’ and just then the clouds started moving and from the side of one of them I saw two faces looking down on me – it was Jade, totally clearly,” she told The Mirror.

“She was beaming down and her hand was up as if she was waving. Her head was still bald but she looked so happy.”

Well I wasn’t laying on the sunbed next to Jackiey, so I don’t know if she speaks the truth or not.