UK NEWS: JADE GOODY’S STORY ‘COULD BE MADE IN TO A HOLLYWOOD FILM’ 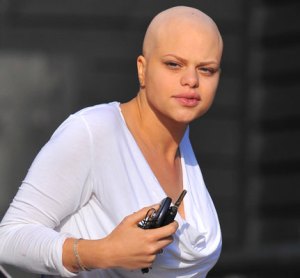 And who have they got in mind to play Jade? Queen of playing British characters Rene Zellweger?

Speaking to the Daily Telegraph, Jade Goody’s publicist/agent Max Clifford said his client’s tireless fight against cervical cancer had attracted enormous interest and sympathy across the US entertainment community.

He described a film about her life as a distinct possibility, adding: “The interest in Jade, not just in America but around the world, is rising every day.

“Everyone wants to cover her story. I’ve had interview requests from Larry King, Oprah Winfrey and every major TV network.” Mr Clifford said that the music mogul Simon Cowell, who is another of his clients, had informed him of the growing transatlantic fascination with Miss Goody, 27.

He said: “Simon has only been back in LA for the past couple of weeks after a long stint in London so he had no idea how big Jade’s story has become over there.

“He says that since he’s been back over there, practically everyone is asking him how Jade is doing. All the celebrities he meets have been following her story on TV and in newspapers and magazines.”

Mr Clifford said a film about her life was so appealing because of her rags-to-riches success story.

“When a story becomes this big, the more chance there is about something like that [a film] happening.”

“She has achieved so much by simply being herself and telling people just how it is. That’s the most refreshing thing about Jade – her honesty. Continue reading….

The vultures are already beginning to circle….