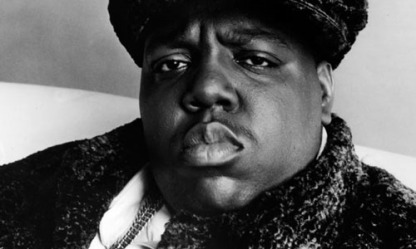 “It opens with his murder and funeral, then doubles back to his Brooklyn childhood. We get a few scenes of Biggie at home, in the classroom, and on the corner dealing crack; there are some rap posters in his bedroom, and we see him fill a rhyme book during a nine-month prison sentence, but there’s no real explanation given for how he went from enthusiastic fan to one of hip-hop’s all-time most revered emcees. Nevertheless, by page 30, he’s signed to Puffy’s label, and from there it’s a mad, tensionless dash to the end of his biography, with all emerging conflicts — his mom’s breast cancer, baby-mama drama, various love triangles (Biggie, Faith Evans, Lil’ Kim; Biggie, Evans, Tupac) — resolved within a scene or two. Read the full description here.

This sounds like its going to be one DRY biopic!