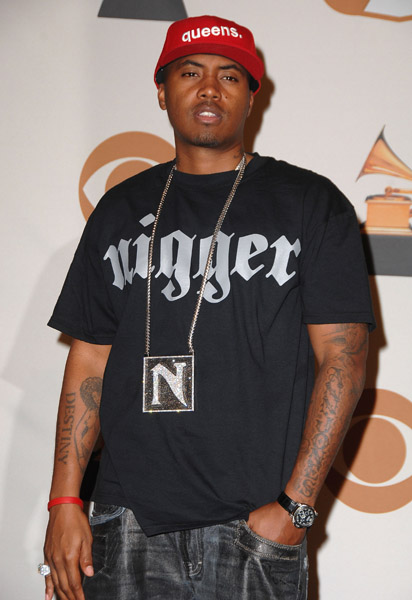 I am sitting here watching ‘Live From The Red Carpet – The Grammy Awards’ on the E! Entertainment channel. So far Alicia Keys, Beyonce, Jay-Z, Ne-Yo, Ludacris, Souljah Boy and Rihanna have all walked the red carpet and have engaged in small talk with E! hosts.

Anyway, so I’m sitting here taking in all the fanfare when the camera zooms in on the arrival of Kelis and Nas…..

Nas and members of his entourage decided to use this event to promote his forthcoming album by turning up to the Grammys wearing black T-Shirts with the word “Nigger” printed across the shirts in large grey capital letters…..

Now was it appropriate for them to unveil this controversial marketing tool at the prestigious Grammys?

Nas’ explains his chosen attire for the evening….