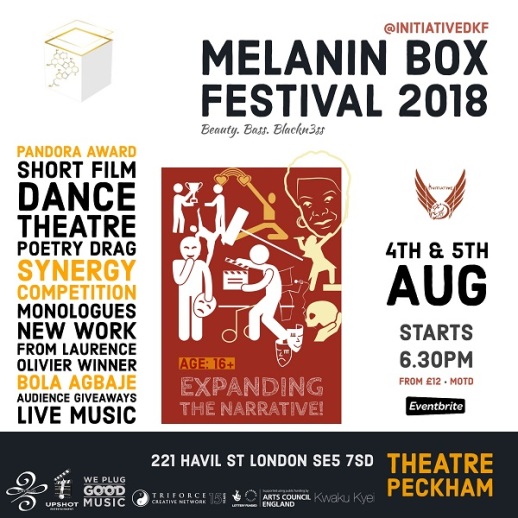 Following its seminal, critically acclaimed and sold-out debut at the Bussey Building in 2015, as the first ever UK festival dedicated solely to spotlighting the multi-disciplinary work of Black British creatives, Melanin Box Festival is back this summer at Theatre Peckham, for a two-day celebration of all things Performance Art, offering the very best new talent across theatre, film, music and dance, on August 4-5.

Created and curated by collaborative arts duo initiative.dkf, whose vision statement is to “normalize Black British narratives and atypical storytelling”, the focus of Melanin Box Festival is to increase visibility and artistic opportunities for BME creatives in the UK, whilst highlighting depictions of black people beyond preconceptions. MBF want to bridge the gap, break down stereotypes and bring the many diverse Black British experiences and subcultures to light.

Its 2015 3-day debut was the first of its kind to provide such a long coveted platform for BME creatives to showcase their work at that level. Its participants have now gone on to achieve greatness in their arenas, including Seraphina Beh (Eastenders, Bush Theatre, West End), Kayode Ewumi (Hood Documentary, Enterprice), and 2015 Synergy award winner Tobi Bamtefa (National Theatre, Sky Atlantic).

Now supported by Arts Council England, this year’s festival is spread over two days of Competition and Celebration. Aiming to discover new narratives, and ways to tell old ones; bursting with emerging musicians and powerful performances across disciplines including poetry, comedy and much more.

Already confirmed for the festival is none other than Laurence Olivier Award winning playwright and screenwriter Bola Agbaje (Sky Atlantic, ITV, Royal Court Theatre); a screening of The Right Choice by award-winning director Tomisin Adepeju, which premiered at the Sundance Film Festival earlier this year, as well as powerhouse vocalist Ruth Brown, semifinalist from BBC One’s The Voice UK, Season 1.

Speaking about the inspiration for Melanin Box Festival, Damilola DK Fashola and Wofai, of initiative.dkf, said:

“this is an opportunity to tell our varied stories from our own mouths and celebrate Black British talent in Britain – not once they’ve blown overseas – there has always been a scarcity of roles and opportunities for Black creatives in stage, television and film, as well as roles, which convey the same narratives. When you look at the British industry especially, we see our most known artists only being truly recognised once overseas. Melanin Box Festival is our response to this”.