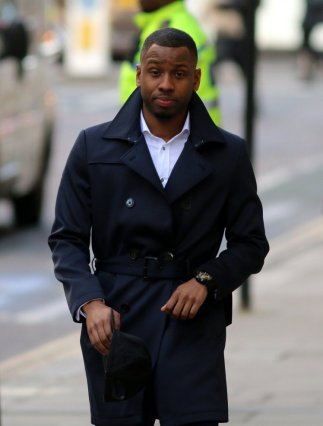 Nathan Fagan-Gayle at the Old Bailey

Nathan Fagan-Gayle, 29, received money from 73-year-old Elizabeth Curtis, from Cornwall, in May 2014, after she was conned over the phone by a fake police officer.

He was convicted at the Old Bailey of laundering £20,000 from the so-called ‘Bank of Terror’ scam in Syria to record a new album in the US.

Fagan-Gayle – also known as Starboy Nathan – had denied any involvement in the scam, claiming he thought the cash was payment for agreeing to do shows in Dubai for a man he met at Dstrkt nightclub in London.

Asked by his lawyer Paul Stanislas what he thought when the money appeared in his bank account, Fagan-Gayle said: ‘I was happy.’

Fagan-Gayle ‘hit the shops hard’ and blew thousands of pounds from his share on designer clothes and flights to LA, as well as transferring chunks to his girlfriend and his mum.

The jury rejected his explanation and found him guilty, along with a number of other young men involved in the wider £900,000 fraud.

Listen to the latest episode of the Tea & Biscuits podcast (Episode 21) to hear my thoughts on this sorry situation.