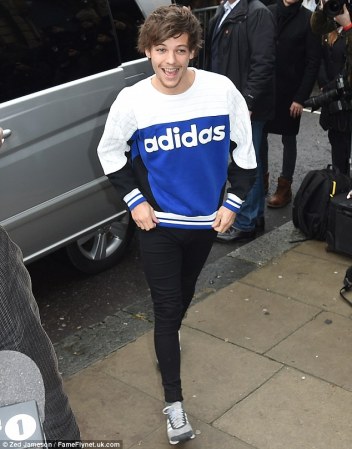 Forget about “charity” it’s all about Adidas

Some artists rocked up in chauffeur driven vehicles and it is clear that they received cheques from Adidas to use this occasion to promote the brand. Even Starbucks got in on the sly promotional act, sending staff to deliver ‘crates of warm beverages for the stars’ in front of the waiting media.

The comments below via The Daily Mail comment section basically sum up my thoughts on this.

“They can sing their lungs out for all I care, I won’t be giving a penny to this sham gesture. I only give to charities that are totally accountable, fair, transparent and reputable, oh… and not led by a self-centered egotistical has been!”

“With the Ebola scare they have found an excuse for another egofest in which they gain maximum publicity and their careers are enhanced. Note, One Direction use this as an excuse for blatant product placement. This whole thing disgusts me.”

“Bob Geldof and co are just self-serving and self promoting idiots. If they really cared they would sell off their assets and give to the poor instead of forcing the rest of us to do so”.

I am surprised to see that Sinead O’Connor has agreed to be a part of this spectacle. Her bulls**t detector used to be on point.

The lyrics to this #BandAid30 song are ridiculous, misplaced, ignorant, backwards, nauseous, spiritually malevolent and condescending.

Why hasn’t anyone pointed out to Bob Geldof and his partner in crime Midge Ure that West Africa is made up of many countries. The only countries affected are Sierra Leone, Liberia and Guinea. THREE COUNTRIES!!!