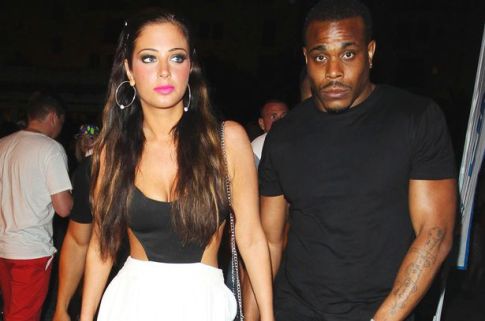 Tulisa and Mike during happier times

Contostavlos, 26, is due to stand trial after she denied being concerned in brokering the alleged drug deal which was exposed by the Sun on Sunday.

It’s claimed the singer told undercover reporter Mazher Mahmood, dubbed the “fake sheikh”, that she could arrange for him to buy cocaine from Coombs between May 20 and May 24 last year.

Coombs was secretly filmed selling the Class A drug to an undercover reporter at the Dorchester Hotel.

According to the Daily Mirror:

Coombs gave Contostavlos a quick kiss on the cheek and hug and stroked her face as he left the dock.

Bailing Coombs, Judge Alistair McCreath told the rapper he would be sentenced at the end of Contostavlos’ trial.

He said: “Michael Coombs, I’ll sentence you at the conclusion of the proceedings against your co-defendant, whatever that conclusion may be.

“In the meantime I’ll permit you to keep your bail, but you must understand that consists of no sort of indication as to what sentence you’ll get at the end of it.

“On that understanding you may go.”

After he was released on bail last year Coombs told waiting reporters:

We are innocent. We haven’t been charged.

Anyone can edit or chop things together on video.

The truth will come out in the end. I don’t want to go into much more detail.

I am going home to be with my family. This is ruining my life. I am not a drug dealer. I have never sold drugs in my life.

Mike GLC added that any evidence caught on camera had been “taken out of context” and the duo were “set up”.

A grown man pushing  40 really should have known better.

In reality the man didn’t have a leg to stand on and had no choice but to plead guilty. He may get a lighter sentence now.

As for Tulisa’s fate… only time will tell.