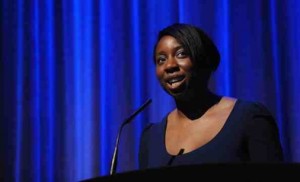 Winner of The London Rushes Soho Film Festival Awards for Best Newcomer, Tight Jeans is the debut film from the UK’s Director/ Writer Destiny Ekaragha, and produced by Tamana Bleasdale for Pollibee Productions. as seen on Channel 4 in 2011.

Tight Jeans had a major impact when it was first shown at The London Film Festival in 2008, so much so that it propelled Destiny from unknown into an overnight success. The film went on to receive praise from the critics all over the world and firmly placed Destiny as one to watch by the British Film Industry.

TIGHT JEANS is a light comedy that touches on modern attitudes towards other cultures. It explores the ignorance we tend to have of one another, sometimes without even realising it.

Three black teenagers are becoming frustrated while waiting for their friend. A young white lad walks past wearing super tight jeans. The boys look on until one of them asks the pivotal question, “How can a man wear jeans that tight?” This sparks a hilarious debate about race and culture.

Accolades: Selected and granted funding as one of the 6 short films to represent Lewisham, Southwark & Lambeth Film and Arts Councils in association with Film London. Premiered at and was voted Best Short Film at the Times BFI 52nd London Film Festival by the Observer newspaper. Won Best Newcomer Award at The London Rushes Soho Film Festival 2009