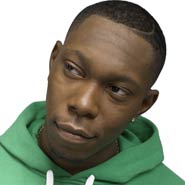 Dizzee Rascal (real name Dylan Kwabena) was hauled off a plane at Heathrow yesterday for allegedly hurling abuse at a stewardess – and now he could face a life ban from British Airways.

The rapper is said to have hurled foul-mouthed insults at the stewardess as he sat in First Class.

He had been on his way to Portugal to the Optimus Alive! festival, where Coldplay and Foo Fighters were also on the bill, but as a result of the incident was unable to play there.

Tempers flared on the Airbus 320 as it sat waiting on the tarmac for more than an hour because of technical problems. Continue Reading ….