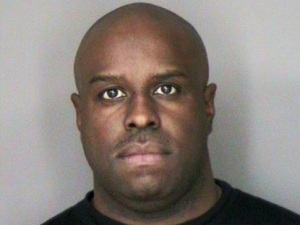 Funk Flex posted his mugshot on Twitter - Who does that??? WHAT A FOOL!!!

The Daily News reports a woman who identified herself as Flex’s wife told Greenburgh Town police that she and Flex got into a fight over threatening texts he sent Thursday night, police said.

The fight escalated at the couple’s Ardsley, NY, home, and the hip-hop star pushed the woman to the ground, cops said.

She grabbed her cell phone to call police, but Flex apparently slapped it out of her hands and stomped it, cops said.

He fled the house before police arrived, but officers later found him “a short distance away in his vehicle, a 2011 Chevrolet Camar0,” cops said.

He was arrested on three counts of criminal mischief and harassment, cops said. Flex was arraigned in Greenburgh Town Court Friday and released on $500 bail.

Funk Flex seems to have a HUGE problem with women. I don’t think he likes us, because this isn’t the first time he’s been accused of verbally abusing/ assaulting a woman.

Back in 2002 Flex was accused of verbally abusing, choking and scratching DJ Steph Lova (real name Stephanie Saunders) who at the time worked for rival station Power105. Click HERE to read all about it.

Flex later pleaded guilty to harassment charges and was ordered to perform 35 hours of community service. He also managed to avoid jail time from the more serious assault charges.

Flex made a beeline for Steph after an interview she conducted with rapper Nas on her show.  During the interview Nas accused Flex of taking money under the table to play records. But instead of confronting Nas this great big tub of lard decided to take his frustrations out on the softer more vulnerable target.

It’s been noted over the years that Flex doesn’t hold back when it comes to disrespecting/confronting women, but runs and hides like a frightened puppy when the situation involves a man.

One of these days he’s going to run up on the wrong female, who will give him two bitch licks with a belt. One bitch lick clean across the face and the other across his large gut.