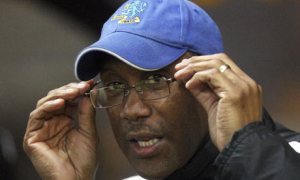 Macclesfield Town have announced that manager Keith Alexander has died at the age of 53.

Alexander, who suffered a brain aneurysm in November 2003, passed away after arriving home last night from the League Two match at Notts County.

He had recently returned to work after taking time out because of illness.

“Keith was a splendid man. He will be sorely missed at the Moss Rose and by everyone involved in football,” read a club statement.

“Our thoughts and sympathies are with his family at this very difficult time.” Continue Reading…

Keith Alexander was one of TWO black managers left in the football league.

Richard informs me that the other is former England player Paul Ince, “who is currently unemployed”.

Click HERE to read The Guardian’s article on Keith Alexander.