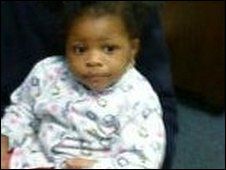 An 18-month old girl who police mistakenly allowed to be taken by an impostor from a station has been found.

A woman claiming she was a friend of Ms Boakye went to Walworth police station and took the toddler.

The child was found in Harlesden, north London. A woman, 31, has been arrested on suspicion of abduction.

A Met spokesman said officers were called at 1400 GMT by a member of the public and that the toddler and the 31-year-old woman were found 55 minutes later on Harlesden High Street.

I was relieved to hear that baby Audrey was found safe and sound.

Now I want answers from the MET police! I hope there is a thorough investigation in to why Audrey was just handed over to a stranger without them doing the necessary checks first!