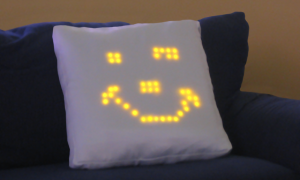 A stuttering Nigerian man, who says he can’t find a girlfriend, has announced that he plans to marry his pillow instead.

Okeke Ikechuku told the Daily Metro that his stammer makes it difficult for him to speak to girls who laugh at him whenever he talks, Ananova reports.

But, the 26-year-old from Lagos admits that he has needs and wants a companion to sleep with. So, Ikechuku says he will marry his pillow because he has been sleeping with it since he was 16 and has fallen in love with it.

The laborer added that, unlike a woman, the pillow would cost him little or nothing to maintain. He says he plans to spend the rest of his life with it.

…I wonder if the pillow is good in bed…