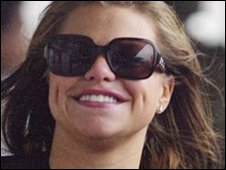 Reality TV star Jade Goody has spent her first night on the Indian version of Celebrity Big Brother.  (WHY????? I can’t believe they invited her on the show SMH….)

It comes 18 months after the 27-year-old was accused of racism towards Bollywood actress Shilpa Shetty in the UK show.

Goody told Indian audiences before she went in to the house the incident with Shetty was “in the past” and that she was “not proud of it”.

“I know I have behaved wrongly but that was my yesterday,” Goody said.

“Today, I have changed for the better and I am here to prove it. I am determined to be myself and win everyone’s heart.” Continue Reading…..

And Jade’s publicist Max Clifford has just announced that she has been diagnosed with having cervical cancer.

Apparently before flying out to India, Jade had collapsed several times and had under gone various tests.

She was given the news while in the the Big Brother house over the phone yesterday……. Continue Reading…

Any news item that involves a client of Max Clifford’s is often exaggerated. I just hope they haven’t embellished the diagnosis to win Jade public sympathy.

Jade’s lucrative career crashed and burned, so I would not put anything past her or Max Clifford…..