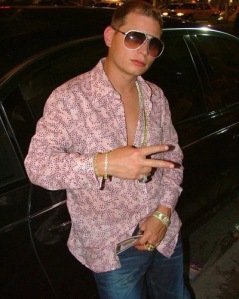 Scott Storch was once considered one of the “go to” producers in music. He was crafting hit after hit over the years, but as of late, his chart topping hits are few and far between, and reports of financial problems continue to surface.

His empire seems to be sinking, thanks to his lavish way of living, excessive spending, and poor money management, not to mention to downsizing music industry. Storch once commanded an estimated $100,000 per beat. But with the decline of music sales, labels refuse to pay those prices any longer.

According to reports, 34-year-old Storch is nowhere to be found these days. The Associated Press reports that Storch owes over $500,000 in real estate taxes for his $10.5 Miami waterfront mansion, and previously had warrants out for his arrest for not turning up in court in his child-support case in June. Continue Reading….

Too much flossin and not enough saving!

Tagged as: Brok pocket, Missing in action, Scott Storch, where did it all go wrong?