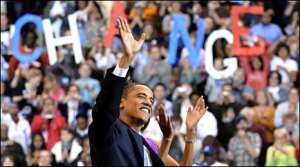 Barack Obama has declared himself “the Democratic nominee for president of the United States”.

He was speaking to a cheering crowd on the last day of the primary season, as projections showed he had earned enough delegates to clinch the nomination.

Of the states that voted, Montana was won by Mr Obama and South Dakota by his rival Hillary Clinton, US media say.  Continue Reading…