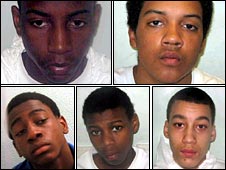 Kodjo was stabbed in the heart in March 2007 after being ambushed by a gang, including two girls, armed with knives and bats in Hammersmith, west London.

Tirrell Davis, 17, from Shepherd’s Bush, west London, and Brandon Richmond, 14, from Hammersmith, were ordered to serve a minimum of 15 years.

Three other youths were given 10-year custodial sentences for manslaughter.

The court heard that Kodjo went into the area after being challenged to a fight by one youth and was then ambushed by others.

He had said to the youth with the knife: “Do you think you are a big boy because you have a knife to me?”

He was told: “I don’t care. I want you to respect me,” the court heard.

As passers-by tried to help, the gang, some of them in their school uniforms, ran away laughing.

I wonder if they are laughing now???

These dumb murderous thugs savagely stole a life, destroyed the lives of a family, and ruined their own chances of creating decent futures for themselves, because they wanted to play at being “gangsta” and craved “respect”.

Let’s see how much respect they now get locked down, while the outside world passes their worthless arses by.

15 – 20 years from now, I hope that Kodjo’s murderers a long with the individuals who stood, watched and cheered as he was being stabbed to death, think back to that fateful day and bow their heads in shame.

Enjoy your stay at Her Majesty’s Pleasure boys!