I posted the Lebron James and Gisele Bundchen Vogue cover on here several weeks ago and a number of you noted that the image used was a little suspect, likening Lebron’s posture/pose in the photo to that of King Kong (See below) 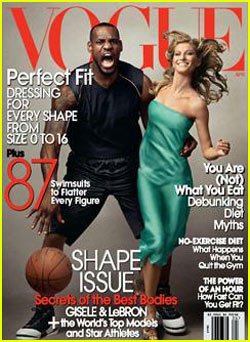 Writer Jemele Hill over at ESPN.com also had this to say….

“LeBron’s image clearly means a lot to him, maybe even as much as pursuing a championship. And that’s why I can’t understand why he would allow Vogue to feature him with supermodel Gisele Bundchen in such a distasteful manner. LeBron has Gisele in one hand and a basketball in the other. LeBron is dressed in basketball gear, with his muscles flexing, tattoos showing and bared teeth. Gisele, on the other hand, is wearing a gorgeous slim-fitting dress, and smiling. But Vogue’s quest to highlight the differences between superstar athletes and supermodels only successfully reinforces the animalistic stereotypes frequently associated with black athletes.

A black athlete being reduced to a savage is, sadly, nothing new. But this cover gave you the double-bonus of having LeBron and Gisele strike poses that others in the blogosphere have noted draw a striking resemblance to the racially charged image of King Kong enveloping his very fair-skinned lady love interest. Vogue deserves criticism, but more blame should go to LeBron and other black athletes, who need to exercise stricter control of their images. If LeBron is brave enough to wear a Yankees cap at an Indians playoff game, picking up a history book and educating himself shouldn’t cause a strain. As it is, LeBron was the first African-American male to grace Vogue’s cover. Too bad it will be memorable for the wrong reasons. Continue reading”

Now are we totally justified in thinking that Vogue’s motive behind the image used was racist, or are we just being over sensitive here?