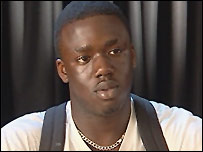 A teenager accused of killing schoolboy Kodjo Yenga has told the Old Bailey it was the victim who started the fight and he only took part to save face.

Kodjo, 16, died from a single stab wound to the heart after being attacked in Hammersmith Grove, west London, in March last year.

The accused, who is now 15 but was 14 at the time, told the court he also did not expect others to join in.

He is one of six boys, aged between 14 and 17, who deny murdering Kodjo. Continue reading

Young black teenagers going to jail and losing their lives over NOTHING!

I bet those who are accused of his murder can’t even remember how or why this all started…..