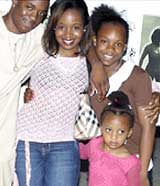 Police say that her 17 year old son Anthony Tyrone Terrell Jr shot and killed the family on the 28th February.

In open white caskets, Deleston, 39, could be seen wearing her deputy’s uniform and her daughters wore pearls and matching pale pink gowns of sheer organza.

Nathaniel Deleston, Joy Deleston’s brother, broke down during his eulogy admitting he had anger towards his nephew but asked fellow mourners not to judge Terrell.

“I am waiting for answers to our questions, but I trust God to give us our answers,” said Deleston.  “I’m not going to turn my back on my nephew.”

Police have charged Anthony Tyrone Terrell Jr with murder, but he will not get the death penalty because of his age.